With over 200 blogs on D4Dementia, some of them now 7 years old, I’ve decided to spend my 2019 year of blogging by re-visiting some of the topics I’ve covered previously, throwing fresh light on why they remain relevant, and updating them with some of my more recent experiences. For my last blog of 2019, I want to look at how we listen to and respect the viewpoints of people with dementia.

In July 2015, I wrote a blog post entitled: ‘Why don’t we listen to people with dementia?’. In that blog I said:

“If we are ever to move beyond stigma and discrimination and towards a truly world-class model of support and care for people with dementia, then giving people with dementia a voice and listening to what they have to say really is the only place to start.”

It was, therefore, with some amazement that I read a report about the UK Dementia Congress debate last month entitled, ‘Environmental lies in care homes play an important role in delivering person centred care’. The Journal of Dementia Care said the following about the debate:

“When can you lie to a care home resident? It was a hotly contested issue at UKDC last week, where delegates debated the use of “environmental lies” in care settings, such as fake windows with painted views, “bus stops” to which no bus ever comes, and disguised doors. “As a person with dementia when I go into a care home I do not want them to lie, either in the environment they create or in their actions,” said Keith Oliver, who opposed the motion that deceptive décor can play an important role in delivering person-centred care. It was an impassioned performance from Oliver, who has young onset dementia, which helped sway the audience from favouring environmental lies at the start of the debate to being firmly against by the end. But independent nurse consultant Lynne Phair, fought valiantly in favour of the motion and said there could be a therapeutic value in meeting the person with dementia in their own reality. Phair added: “Environmental lies must be used wisely.” But there was a resounding victory for the motion’s opposers – also including Professor Graham Stokes – who had 54% of the audience behind them by the end (compared with 33% at start), while the proposers – also including family member Catherine Naj Dyke – had 37% on their side by the end (40% at the beginning).” 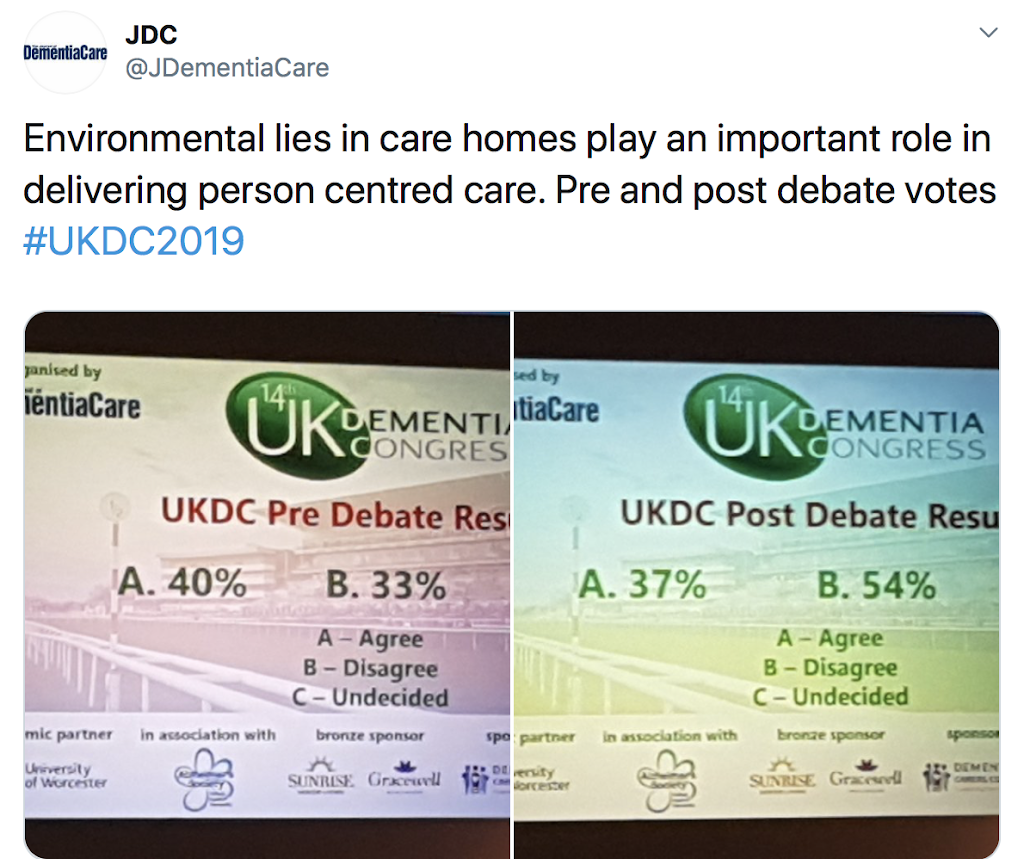 For me, the quote from Keith Oliver says it all, and frankly not only would I have supported Keith had I been at the debate but I wouldn’t have had the temerity to argue against him (which would make me a useless debater!) even if I felt fake environments were a good idea (which I don’t) for one simple reason – He is living with dementia, I am not. My natural standpoint is to show deference to any person living with dementia, putting aside my personal viewpoints and remembering what my dad always told me: “Respect your elders and betters.”

Keith’s views, I suspect, are echoed by many people living with dementia, including the numerous individuals who are living with dementia in care homes and largely don’t have a voice. From my experiences with my dad, I know he found the fake letterbox, door knocker and doorknob put onto his care home bedroom door utterly baffling, and why wouldn’t you? They didn’t function as these items normally would, and they seemed to have been added purely for decoration following a dementia consultant being engaged to ‘improve’ the environment. Sadly, what this consultant didn’t factor in was the amount of confusion and frustration such changes would cause.

In my work with care homes, I have never advocated for the implementation of fake environments. I have always felt, and seen this borne out numerous times, that if the care and support is good enough, if staff really understand dementia and are well trained and supported in their work, then the needs of residents living with dementia will not only be met but continually exceeded.

The money spent on fake environments, which is often considerable, is always likely to be better spent investing in staff. It is people that make the difference in dementia care, nothing is more important than the human element, and to reinforce this I go back to the point I made at the National Care Forum (NCF) Managers Conference last month, and which was reported on by the NCF’s Nathan Jones:

“A hotel environment is just window dressing if the care is not there.”

The type of environmental changes I support are based on bringing the person’s life story alive. I love to see environmental life story work that enables people to be reminded of things in their lives that make them happy or proud. After all, most of us like being surrounded by family photos, mementoes from holidays, and career, hobby, sporting or musical passions or achievements. Most people fill their homes with items that are personal to them, and that is the most apt way to create a supportive environment for a person living with dementia. Even if it’s only within their own bedroom in a care home it is better than the stark, plain, hospital-like rooms that so many people with dementia exist in within care homes, and certainly better than deliberately introducing items or decorations that depict something utterly fake.

As I said in my September 2016 blog, ‘Life story work – The gift that keeps on giving’:

“Documenting memories and turning them into vibrant resources that tell their own unique story has a magical quality about it that I can’t put into words – you really just have to try it.”

So, if you run a care home and are planning some environmental changes in 2020 (or beyond), resolve to: Find out what people living with dementia actually want (ask them! And if the people you support aren’t able to help, contact organisations like DEEP or Dementia Alliance International), prioritise life story work for anyone you support who wants to participate in that, and always keep it real, not fake.