With over 200 blogs on D4Dementia, some of them now 7 years old, I’ve decided to spend my 2019 year of blogging by re-visiting some of the topics I’ve covered previously, throwing fresh light on why they remain relevant, and updating them with some of my more recent experiences. This month, I want to look at continence.

In June 2013 I wrote a blog entitled ‘An urgent need to understand’, which talked about some of the experiences we’d had with my dad’s incontinence and ways in which a person can be supported to maintain their continence. In that blog I said:

“The devastation that incontinence can cause both the person with it, and potentially a spouse or family member who is caring for them, is immense. The more private a person is the harder it will be felt, which was certainly true for my father, who was incontinent for nine years.”

Continence, perhaps more than any other issue, is strongly linked to privacy. In my experiences as a mum I know that not long after a child is potty trained they begin to want privacy when going to the toilet. Such privacy soon becomes the norm for the rest of their life, unless incontinence accompanies a progressive health condition like dementia, in which case needing the support of another person, whether they are your own family or a health or care professional, becomes the new norm. Just because it’s the norm, however, doesn’t mean it feels normal or will ever feel normal.

Continence has come onto my radar many times since I wrote ‘An urgent need to understand’. Professionally this has predominately come through my training and mentoring consultancy work, with one particularly striking example being when homecare staff from one of my consultancy clients came to me to discuss a lady living with dementia who was repeatedly developing bladder infections and soiling herself.

The infections increased the lady’s confusion, and despite trying to provide optimal support staff said that they felt they were failing this lady every time she got another infection. I encouraged staff to really think about how the support being provided was responding to this lady over the course of each 24-hour period. Care staff often only analyse the time they spend with the people they support, rather than what is happening when they aren’t there.

It transpired that this lady was only using the toilet when staff weren’t present, and would often put off going to the toilet for many hours purely because she was confused about the time care workers would visit and concerned about her privacy (staff learnt that this lady had had a bad experience with a previous care worker during a trip to the toilet).

Many different approaches were taken to resolve this issue, including ensuring the lady had a dementia clock so that she knew what the time was, a personalised schedule that was clear to her for when her care visits were, and a lock on her toilet door (that could be opened from the outside in an emergency).

Simple measures, but alongside staff really understanding this lady’s need for privacy for the first time they proved to be the difference in supporting this lady to use the toilet more regularly, thus reducing the recurrent bladder infections she had and improving her quality of life as she soiled herself less.

I would always encourage anyone supporting a person who is struggling with continence to think about the bigger picture, considering how the environment and the person’s routines and plans for the day are affecting their continence. If the person’s day-to-day life isn’t supporting them to use the toilet as often as they need to, problems are inevitable.
Continence hasn’t just come onto my radar through my experiences with my dad and my work, however. On a personal level, continence is something that my midwife was really open with me about during my pre and post-natal care when I had our daughter. 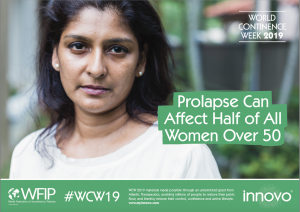 I’ve always felt that preventing incontinence is a great deal easier than treating the physical, mental and emotional effects of incontinence purely because incontinence is about so much more than just wearing a pad. As I said in my ‘An urgent need to understand’ blog:

“Changing our attitudes towards continence, and breaking down the taboo’s associated with going to the toilet, must be a key priority if we are to improve the care provided to everyone who is living with dementia.”