This week will mark what would have been my dad’s 91st birthday, and later on in April, the 6th anniversary of his passing. These milestones have left me reflecting on the last 19 years of dad’s life, how dementia crept into his life and year by year gradually overwhelmed him.

The picture painted of dementia in 2018 seems to have two distinct hues – the brightness of those who are living well, or as well as they can, and the darkness of those nearing the end of their lives, with the multiple physical health problems that I remember only too well. Yet as I think back over those 19 years, it was never as simple as two different hues for my dad.

If anything, it was much more like a rainbow, with the red roughly representing the beginning of my dad’s dementia (which was a gradual onset rather than a distinct change from one day to the next) and the violet representing the end of dad’s life. As the curves change colour, and reduce in size, so my dad’s dementia deteriorated, leaving him with fewer skills and more struggles. 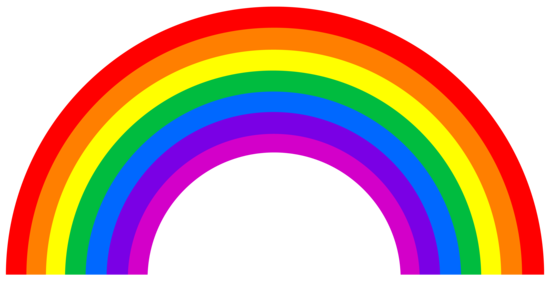 Why a rainbow though you might wonder? It’s bright and cheerful and associated with the freshness and beauty that follows the darkness and rain. I certainly haven’t chosen it because I’m a 100 percent devotee of optimism where dementia is concerned. My positivity has always been tempered by stark memories of times that whilst difficult for me, were undoubtedly far worse for my dad.

I’ve chosen a rainbow because to me it represents balance: The brightness of the colours suggests something special and positive is possible at any point in a person’s dementia, but the reducing curves remind us that the struggles, or the paddling as my friend Kate Swaffer describes it, only becomes more pronounced.

If I think about my dad’s 19 years with dementia – certainly for the majority of the first 10 years – whilst the difficulties gradually increased, my dad had independence, looked after himself reasonably well for maybe five of those years, could read and write for the early years, follow TV programmes and sports, had a fairly good command of language, was able to participate in conversations, and certainly wasn’t slow in articulating his viewpoints. By 2018 standards, he would have made a good Dementia Diarist, a popular DEEP (Dementia Engagement and Empowerment Project) or DAI  (Dementia Alliance International) member, and an engaging public speaker (although my optimism on all of these fronts is tempered by knowing that my dad was a fairly private man by nature, so maybe wouldn’t have wanted to speak publicly).

Those are probably the red, orange and yellow years. By the time we get to the green and blue on the rainbow, dad’s in and out of hospital, and moving from a residential care home to a nursing home. For my dad, the key turning point is his larger stroke, and from that day confusion, communication difficulties, urinary incontinence, changed behaviour and a whole raft of inappropriate interventions (most notably antipsychotic medication) follow. My dad is becoming a much more stereotypical example of what society thinks about when it thinks about a person with dementia.

The indigo and violet years are characterised by further physical decline, with immobility, double incontinence and four years of dysphagia for my dad to cope with before the end of his life. This is the picture most people conjure up when they or a loved one are diagnosed. But as much as the ‘red’ years don’t go on forever, so most people with dementia don’t jump from ‘red’ to ‘violet’ either.

I am a great believer in seeing every face of dementia for what it is: The person living as well as they can in the red to green curves of the rainbow is giving hope to every single individual who has just been diagnosed or will be in the future. Without that hope, everyone just fast forwards to a picture of what ‘violet’ looks like, and that is only going to lead to more rapid deterioration with the added pain of potentially severe depression, hopelessness and even suicidal thoughts.

The person living in the blue to violet curves is never going to offer the same type of hope. They are coping with a greater array of physical health problems and are increasingly reliant on others for their care and support. Our perception is that brightness is fading, but what we learn from these individuals about the human spirit is perhaps even greater than their more articulate peers. Moreover, the qualities we find in ourselves from becoming caregivers represents invaluable, albeit sometimes very painful, life lessons.

Aside from my dad and the people I’ve known personally who are affected by dementia, I’ve met so many other individuals through my professional work who are living with dementia, coping (or not coping, and yes, sometimes suffering) and every single person has taught me something. As my dad took his last breaths I learnt about peaceful serenity. As I see a person living with dementia giving a conference speech, I learn about their strength to stand there and tell their story (often without notes, something I cannot do). As I see a person living with dementia in a care home trying to regain mobility after a broken hip, I learn about determination. As I read a book, a blog, or a social media post from a person with dementia who is laying bare their personal experiences, I learn more about living with dementia than I ever could from a textbook. As I see someone managing a few mouthfuls of food, and breaking out into a satisfied smile that they’ve outwitted dysphagia for one mealtime, I see a will to go on living despite the obvious struggles.

When my dad’s life started to change, which in hindsight was when he began developing dementia, I had no idea we had 19 years ahead of us. As every year went by, we just tried to make the most of whatever situation we found ourselves in and give dad the best quality of life possible. I certainly don’t think we always managed that, and I dearly wish I’d known then what I know now.

Did my dad live well? Yes sometimes. Did he suffer? Yes sometimes. But when I reflect now, the fact that it’s a rainbow I gravitate towards, feeling an affinity with the brightness rather than the reducing curves, reminds me that although dad is gone we lived those 19 years together, and for all their ups and downs there was a beauty in the love that bound us together and that shines on.

One thought on “The rainbow of dementia”