Dementia Friends is the UK Government’s initiative, in partnership with the Alzheimer’s Society, to increase basic awareness of dementia within, initially, England but now also in Wales and Scotland. To become a Dementia Friend you undertake training, either in person or online, and are asked to commit to an action as a result of your increased knowledge of dementia. To become a person who delivers the training – a Champion – you complete a one day course and are then equipped with resources to go back to your community and hold face-to-face training sessions.

I trained as a Champion in May 2013, and although I wouldn’t say that every aspect of Dementia Friends is perfect, its benefits should be recognised. Increasing dementia awareness, even at the most basic level, is generally a positive step forward. Likewise, giving people something to belong to by giving them a badge, and a real sense of joining a social movement for change is also a positive example to set. 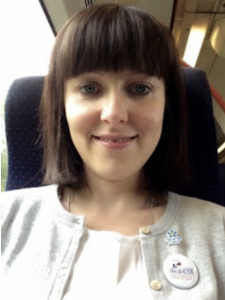 Some of the main problems with Dementia Friends have come from the name itself, which some people have misinterpreted as suggesting that people who become Dementia Friends then go out and befriend random strangers who are living with dementia. Equally, the idea that people are ‘trained’ gives the impression that this is comprehensive dementia training which replaces other forms of more in-depth, and potentially costly, education.

To be fair to those who have pioneered Dementia Friends, both of these common myths are roundly condemned by the official literature that accompanies the initiative, but never-the-less, I still encounter health and social care organisations who believe that giving their staff Dementia Friends training means they have trained them in dementia care. They have not.

Dementia Friends isn’t without its critics, and equally its hardened enthusiasts. I sit somewhere in the middle. I like the basic concept, the positive way it’s been embraced by people who have never even thought about dementia, and I am happy to wear my badge. Indeed it goes everywhere with me and has proven to be a great conversation starter.

But where to now? The next target is to create another three million Dementia Friends, which certainly demonstrates ambition, but while we increase the community-wide understanding of dementia, there remains a question mark over how much money is going into the specialist support that is desperately needed.

The training of health and social care professionals is still clearly not at the level it needs to be, and may be many years away from universal tangible improvements, no one really knows. The quality of training in health and social care settings is hugely variable, and the new Care Certificate will only go some way towards bridging that. The vast majority of training still never really gets to student’s heart and soul in a way that will be utterly unforgettable, and will permanently improve their practice and inspire them to deliver the very best care. Such an impact is as vital for newcomers in health and social care as it is for those who have been working in these professions for numerous years.

For people who are living with dementia and their carer(s) and families, access to dementia support workers, befrienders and other associated facilitators and providers of support and information is patchy and their skills aren’t universal, so if you happen to be assigned a hugely knowledgeable and empathetic individual that’s great, but you may very well never meet such a person. Equally, there is no national programme to offer training to people with dementia or their carer(s) in a bid to help them to live as well as possible throughout their life with dementia.

The idea of dementia coordinators to help those affected by dementia navigate the services they might want to access has long been muted, but again, this isn’t universally available. There is an expectation that GP’s coordinate, but you can’t do that effectively in 10 minute appointments, and besides, many GP’s would argue that they need more specialist training in dementia to take on such a role.

Primary care and community (district) nurses are potentially ideally placed to provide specialist dementia support, especially in the case of community nurses who are visiting people at home. However, there is no national scheme to recruit and train the additional numbers of nurses who would be needed in order to provide this type of service to everyone who wants it, and besides, where would the money come from?

Then of course there are Admiral Nurses – specialist dementia nurses who are to dementia what Macmillan nurses are to cancer. Admiral Nurses have been credited with providing invaluable support to families affected by dementia, in some cases even saving carers from potential suicide, but they are not trained by the NHS or Social Care. Admiral Nurses are provided by Dementia UK – a charity who are dwarfed in matters of dementia policy and strategy by the Alzheimer’s Society.

Admiral Nurses are seen by many people as an expensive option, but evaluation exercises are starting to prove otherwise, and frankly even if they are an expensive option, if they provide the support that families need then I would suggest that in a compassionate society that’s aiming to lead the world in dementia care and support, it is a price worth paying.

The money that has been invested into creating the social model of dementia awareness (£2.4m is quoted in this press release announcing Dementia Friends, while Public Health England issued a call for advertising agencies to pitch for the ‘Dementia Movement’ brief in 2013) may have been well spent considering targets have been reached. It can only be hoped that our communities are enhanced by having this greater understanding of dementia.

My fear, however, is that without the specialists to call upon for each and every person affected by dementia, the overall aim of enabling people to live well with dementia will be lost. I’m sure that life for my dad would have been improved through living in the age of one million Dementia Friends, but I also know that through the many difficult challenges we faced, the decisions we had no idea how to make and the questions we had that went unanswered, that families affected by dementia often need a bit more than just a friend.