So here we are in 2015, with all the usual hopes for improvements in services and support for people with dementia and their families. It’s tempting to write my first blog of the year on what needs to happen to enable everyone with dementia in the UK to live well, but I want to kick off 2015 by transporting you to South Africa where I was incredibly fortunate to spend last Christmas and New Year.

I had never travelled so far before, or had such a long holiday – well, carers generally don’t do they? The purpose wasn’t primarily about sun, sea or sightseeing, but to spend time with my partner’s family, particularly his parents – the other elements came as an added bonus. 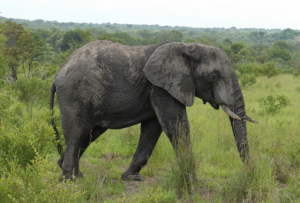 Spotted on my Kruger Park Safari

Foremost in my mind was a plan to put my work to one side, leave my campaigning and awareness raising in the UK, and switch off from everything related to dementia. It’s been such a huge part of my life, both personally and professionally, for as long as I can remember so a complete break seemed a great idea. What I discovered, however, is that it’s amazing how the things you are really passionate about seem to find you, even in distant lands.

There I was browsing in a shop in a rustic lifestyle centre near a rural African town when I discovered small purple packages bearing the message:

‘An elephant never forgets… but sometimes humans do…’. 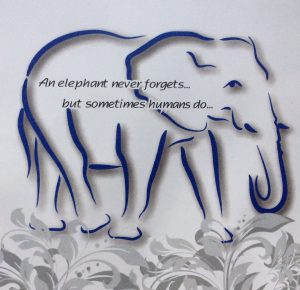 An elephant never forgets… but sometimes humans do…

Inside the packages were little necklaces and the following explanation:

“Creating awareness for Alzheimer’s and Dementia

An initiative by Red Bush Jewellery (www.redbushjewellery.co.za) to create awareness of Alzheimer’s… the proceeds of the sale of these necklaces will go to The Living Cornerstone facility based in Sedgefield, Western Cape, South Africa, which specialises in the care of these people (www.thelivingcornerstone.co.za).

Alzheimer’s disease damages the brain. It causes a steady loss of memory and how well you can think and do your daily activities.

It is a debilitating disease for the sufferer as well as for his or her family and caregiver. It is not easy to accept that your loved one will be there in body but not in mind. It is hard to think that someone you have known all your life will eventually not know who you are.

The Living Cornerstone is there to help families cope with the inevitable, to lighten the load and provide a secure environment where sufferers can be cared for in a loving, stimulating, homely atmosphere, a real home-from-home ambience.” 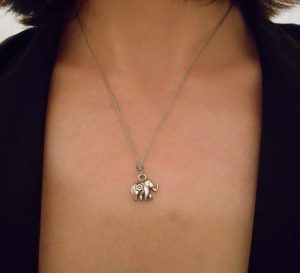 My elephant necklace – Raising awareness of dementia in South Africa

Admittedly the language and in particular the use of the word ‘sufferers’ isn’t reflective of current thinking, but putting that to one side, everything about this made me smile. There, in the heart of rural Africa, someone had decided to do their bit to raise awareness of dementia, and I can only imagine just how vast that task is.

Everything in South Africa feels huge – sweeping landscapes, lakes and rivers as far as the eye can see, towns and townships that spread out before you in what feels like a never-ending picture. And I only saw a tiny fraction of what this country, with a population of over 52 million people and a land area of over 1.2 million square kilometres, actually consists of.

Seeing the way many of the poor people live my mind was inevitably draw into wondering how on earth you would begin to support a relative who is living with dementia when even getting clean water is a daily struggle. Awareness and understanding of the different forms of dementia, never mind accurate diagnosis, is likely to be alien to most people. The effect of that on a person with dementia, when they are unlikely to know what is happening to their brain and potentially are subjected to a lot of prejudice, misinformed beliefs and experimental ‘cures’ is likely to be about as far removed from ‘living well’ as we could possibly imagine.

That viewpoint was reinforced during a conversation I had with a lovely lady from Swaziland. She asked me what I did for work, and I began by telling her about my dad. Despite speaking perfect English she had never encountered the word ‘dementia’ and asked me what it was. In explaining to her I discovered that she didn’t know that a person’s brain could undergo these changes, or of any similar disease or condition going by a different native or traditional name.

All of this just reminded me that it’s easy to live in our little bubble of heightened dementia awareness, diagnosis targets, battles over health and social care provision, and excitement at breakthroughs in research. We are informed (even if at times it doesn’t feel like it), with treatments and therapies to fight for (albeit limited), and a standard of care that we expect (even if we don’t always get it).

As the necklace packaging says, ‘An elephant never forgets… but sometimes humans do…’ Meant in the context of dementia awareness in a rural African area it is a priceless message. But it also has huge value in the UK too – as a reminder of how far we have come as an awareness-raising country, and how for so many other people around the world there is so much more that needs to be done if they are to ever live well with dementia.

2 thoughts on “An elephant never forgets… but sometimes humans do…”