Statistics drive health and social care policy. If a condition, disease, treatment or care option doesn’t have a fairly alarming statistic attached to it, it is likely to be ignored.

Interestingly, however, I’ve only really learnt this since I began doing the work I do now as a Campaigner, Consultant, Writer and Blogger. In any year out of the 19 that my dad lived with dementia, I couldn’t have told you the latest statistic on the total number of people in the UK who were living with dementia. The best stat I could have given you in the 8+ years that my dad lived in one of his nursing homes is that the home could accommodate 60 people, all of whom were living with a type of dementia.

Admittedly my dad may well have been identified on GP registers as having dementia (everyone with dementia should be coded as such on GP systems, but of course in practice this is often either not done or is done inaccurately). Also, as someone receiving social care he may well have been part of a statistic related to numbers of older adults in care homes. In both instances, however, I can’t say with certainty as relatives aren’t involved in these processes.

What I can testify is that when you are caring for a loved one with dementia, life feels considerably more compact than the vastness associated with national statistics. It’s pretty much just you, your loved one, and any wider network of family and friends that you may have. If your loved one is attending a support service or living in residential care you’ll be meeting a few other local people in a similar position to you, but that is pretty much as big as the picture gets for most people.

Since my dad passed away, plenty of statistics have be published, revised and republished. We now have the Dementia Map for members of the public that reports figures on care, support and research across England, the Dementia Prevalence Calculator for clinicians, and with the launch of the PHE Dementia Intelligence Network, we can expect far more statistics to be produced in the future.

The latest figures published by the Alzheimer’s Society earlier this month on the prevalence of dementia tell us that:

By the 2015 General Election 850,000 people will be living with dementia in the UK. By 2025 that number is expected to rise to 1,142,677 – more than the entire population of Birmingham, the UK’s second largest city. And by 2051, the prediction is that 2,092,945 people will be living with dementia – that’s more that the populations of Liverpool, Manchester and Birmingham combined. 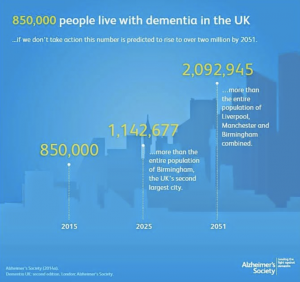 225,000 people develop dementia every year, which equates to roughly one person every three minutes. 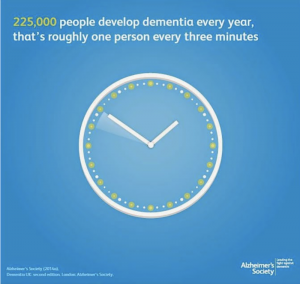 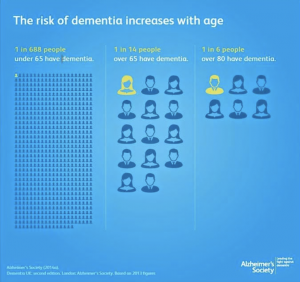 Every single one of these figures are of immense importance to the people charged with planning services, but I question how much translation really happens between the figures that get published in reports and the real-life experiences of people who are living with dementia and their families.

I acknowledge that polls are conducted to inform us with more practical information. For example, in the Alzheimer’s Society report ‘Dementia 2014: Opportunity for Change’ we learnt that:

61% of people with dementia had felt depressed or anxious recently, 40% had felt lonely recently, 52% felt that they did not get enough support from the government, 34% did not feel part of their community, 28% are not able to make decisions about how they spend their time and 18% felt that they were not living well with dementia.

However, these figures came from a sample of 1,327 people, all of whom were in-touch with the Alzheimer’s Society and presumably had received some level of support. In my dad’s 19 years of living with dementia I can confirm that I was never asked to complete any national surveys – the only surveys I had were from his care providers, CQC and their predecessor organisation CSCI, to find out how satisfied we were with the care dad was receiving.

If we as an incredibly involved, pro-active, supportive and loving family never had any personal input into gathering UK-wide dementia-related statistics during my dad’s lifetime, then I wonder how many other people who are living with dementia and their families are falling through the statistical net? It would also be worth noting that we never had any support from any dementia charities during my dad’s dementia – I wonder how true that is of other families in 2014?

Granted much has changed since my dad was alive. Improvements have been made to services and support, and awareness has grown significantly since the Prime Minister’s Dementia Challenge. If you are in-touch with modern-day dementia services then you are potentially going to have a far greater chance of living well with dementia. The point is, however, a lot of people aren’t in touch with those services.

Pretty much every person I talk to about dementia (which is a routine occurrence not just in my work time but when I’m out socialising and enjoying recreation) knows very little, or absolutely nothing, about the services and support available to them. It is so common place that I now have a growing compendium of links for distribution! This only backs up my concern that while we paw over the ‘big picture’ statistics, families all over the UK are flailing in the darkness, unsure of what a diagnosis of dementia means and how they will cope in the years ahead.

So my message to the policy makers is this: by all means gather statistics, gather as many as you feel you need, but don’t run away with the assumption that as things stand they tell you the whole story about dementia because they don’t. My dad lived with dementia for 19 years, accessed numerous services and received care that cost an untold amount of money, yet the only national statistic I ever knowingly contributed to on his behalf was the one that recorded ‘dementia’ on his death certificate (and that only happened because I insisted I wanted dementia specified). A bit late to help him live well then.

2 thoughts on “Falling through the statistical net”