I chose the title, ‘Why don’t we listen to people with dementia’ purely because the majority of society doesn’t. Despite awareness-raising campaigns that have begun to change the perception of dementia, stigma still looms large, language is still used in a derogatory, belittling way that helps to re-enforce stigma, and people with dementia are largely talked about by others, or ignored completely.

Reflecting on my dad’s life with dementia, he never really had a voice. As a family we didn’t understand dementia for many of the 19 years dad was living with it (and certainly in the first 10 years before his diagnosis), so in essence we were just muddling along together. In the last few years of dad’s life, when he lost his more vibrant communication abilities, we did our best to advocate for him, but I appreciate now, more than ever, that the very best we could ever have done for dad was to interpret for him, and where there is interpretation there is margin for error.

The only true representation of each person’s unique experience of living with a diagnosis of dementia is from that person themselves. Anything else is a substitution.

I understand this more now thanks to some of the inspirational people I’ve been fortunate to meet who are living with dementia. Sharing my dad’s life gave me an education in dementia like none other, but with dad gone, some of the amazing people who are living with dementia that I’ve met since then help me to keep learning, and that is a gift more precious than I could ever describe.

I was recently asked to compere a launch event for two books – One by Shibley Rahman, an academic, called ‘Living better with dementia’ (which I’ve written a foreword for), and one by Kate Swaffer, a lady living with dementia, called ‘What the hell happened to my brain’. Kate lives in Australia, and I’ve followed her blog since 2012 – a more insightful read would be impossible to find, and I constantly recommend Kate’s writing to anyone looking to learn more about what it’s like to live with her particular experiences of dementia. 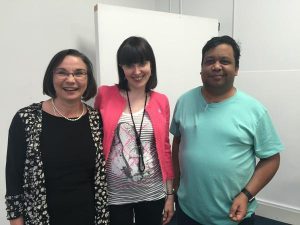 Given the geographical distance between us I’d only ever seen Kate’s presentations on videos, so having the opportunity to listen to her in-person was truly special. Afterwards, I described Kate’s presentation as ‘awesome’ but I’m not sure that really even begins to do it justice.

I know Kate has had many struggles in being recognised and acknowledged as an authoritative individual in her own right, and even more astonishingly, openly demonised by some who disagree with her, frankly, very common sense views. Granted we are all entitled to our own opinions, but I cannot understand why anyone would think Kate shouldn’t share her experiences, or speak out on issues like the use of language around dementia or perceptions of ‘wandering’ and ‘challenging behaviour’.

The discomfort around Kate’s advocacy for the rights of people with dementia seems to have its roots in the belief that questioning the status quo, the way things have always been ‘done’ and ‘described’, is somehow taboo. Yet surely the reason society has progressed so far in numerous areas of life like medicine, science and technology is precisely because someone decided to question the status quo, do something differently, and find remarkable results.

Like an ostrich, there seems to be a desire to bury heads in the sand, when in reality we should be thanking and applauding people like Kate for having the courage to speak out, and the wisdom to talk so much sense. And yes, the irony of that last statement isn’t lost on me, given that people with dementia have, historically, been seen as being unable to speak out and losing any wisdom they had once dementia is diagnosed.

At the moment I feel there is a perception that a person diagnosed with dementia somehow instantly progresses to having very advanced dementia, with all the communication difficulties that can entail which would make it very difficult to be an outspoken advocate of your personal experiences. In reality, however, for the majority of people diagnosed with dementia, progression is much slower, and the ability to speak out and contribute to debate, policy and the implementation of policy is potentially feasible for a significant period of time, depending on personal circumstances of course.

So where do we go from here? Organisations like DEEP (Dementia Engagement and Empowerment Project), The Scottish Dementia Working Group, the European Working Group of People with Dementia and Dementia Alliance International are increasingly finding that their membership, made up entirely of people who are living with dementia, are finding a voice, but in comparison to the numbers of people who are actually living with dementia, the proportion is tiny.

Amongst the total number of people living with dementia in England, I fully appreciate that the majority may well prefer to keep themselves to themselves – my dad would almost certainly fit into that category if he was still alive and newly diagnosed. People who are diagnosed at a younger age are often more widely heard voices, not least because individuals in that demographic may feel more confident in using social media and blogging. In the end, I’m not sure it matters so much who speaks up, just so long as every person with dementia has equal opportunity.

Then of course it is down to organisations, both national and local, governmental and private corporates (including dementia conference organisers), to listen, and that is perhaps the hardest part of all. Home truths don’t often sit easily, nor does challenging the status quo, as Kate Swaffer has already proven. But if we are ever to move beyond stigma and discrimination and towards a truly world-class model of support and care for people with dementia, then giving people with dementia a voice and listening to what they have to say really is the only place to start.