Today would have been my dad’s 88th birthday. By sheer coincidence, this blog is also my 150th on D4Dementia. How I have managed to bring these two milestones together I have absolutely no idea, but it makes this blog post extra special.

For me, today is more about celebration than sadness. That’s not to say that I’m not incredibly sad that I can’t spend the day with my dad, of course I am, although to be fair I think that every day not just on memorable dates. Every April since I began this blog, I’ve written a post about the milestones April brings for us as a family (2013: ‘Reflections on a life lived and a man loved’ and 2014: ‘A loss of innocence’), but this year I want to focus more on how we celebrated today when my dad was alive – happy memories that I will always cherish and that I hope might inspire other families. 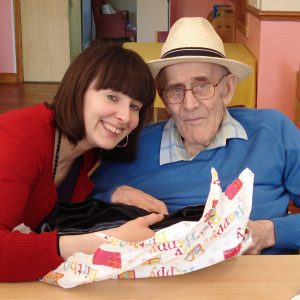 As regular readers will know, my dad spent 9 years in 3 different care homes. That’s 9 birthdays that you might be forgiven for thinking were difficult to even contemplate celebrating, given that dad was living in a communal environment and over the years became very immobile and poorly, severely restricting what a celebration could actually involve. Yet quite the opposite is true.

We made the best of the situation we found ourselves in for three reasons:

The nature of dad’s birthday celebrations changed over those 9 years.To begin with we would take dad out, go to the pub and have a favourite meal and a pint, most notably for dad’s 80th birthday. I have a fabulous picture that I occasionally show during presentations at conferences of my dad enjoying his pint on his 80th birthday – a photo that for me really sums up living well with dementia.

Subsequent birthdays were spent at the care home. Dad had a swallowing problem for the last 4 years of his life which made eating out quite difficult. Food choices were very restricted for him on conventional menus, and given that his routine was to have his main meal in the middle of the day, options such as soup really weren’t going to be enough for a man who, gloriously, still had a very impressive appetite.

Just because dad couldn’t go out for a meal, however, didn’t mean that we couldn’t all eat together. We would talk to the chef at the care home prior to dad’s birthday and as a family we would each choose something to eat with dad. A family table would be set in the dining room and we’d enjoy a two course meal with dad. Sadly we never had much success thickening beer, and dad didn’t like the taste of wine in the last few years of his life, so the toast became fruit smoothies.

Generally before lunch we would open presents and cards, not least because dad would often be too sleepy to enjoy them in the afternoon. A standard present was always a new CD, and that would usually be played in the afternoon. As dad liked lots of classical music, it was very easy for us all to get into the spirit of an afternoon nap! I would often be propping my eyes open sewing name tapes into dad’s new clothes (another standard birthday present), before cake arrived. 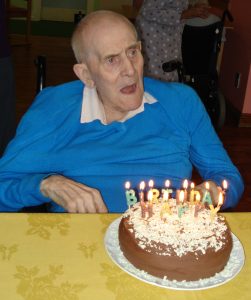 Like many care homes, the homes my dad lived in always gave residents a freshly baked cake for their birthday, complete with candles to blow out. I would also make a cake, and we would share tea and cake with dad mid-afternoon, and then by 4.30-5pm the evening tea would arrive – usually soup, sandwiches and a dessert.

Suffice to say, then, that dad’s birthdays were pretty much crammed full of food, along with lots of photos, singing, laughter, smiles and jokes. I would always ask dad if he liked his presents, and it was always his prerogative to say he didn’t – a little joke between us that always made me smile.

Birthdays, with the exception of dad’s last birthday, were always happy events, so much so that as I write this I have a smile on my face. Sadly, for dad’s last birthday, he was very poorly and would pass away less than two weeks later. Those photos aren’t happy ones, and those memories have a very strange mix of emotions attached to them. Gratitude and relief that dad’s last birthday wasn’t spent in hospital, huge thanks to the wonderful staff at the care home dad had just moved into for their help in getting him out of hospital and the huge effort they made on the day with decorations and a beautifully decorated cake (that unfortunately dad was too poorly to eat), but also recollections that no matter how much we tried to lighten the mood, we knew that dad wouldn’t be with us much longer.

Although those memories may be the last ones I have of my dad’s birthdays, the happy times we had in earlier years outweigh the sadness, and I hope that they give other families some inspiration to continue to celebrate and enjoy special occasions with their loved ones. Living with dementia, and indeed living in a care home, doesn’t have to end all hope of putting the ‘Happy’ into ‘Happy Birthday’.